DFK International is celebrating being named Association of the Year at the International Accounting Bulletin Industry Forum and Awards 2015. 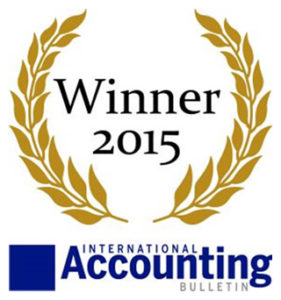 The top honour was awarded to DFK International at the prestigious awards ceremony to showcase excellence in the accounting profession held at the Kensington Close Hotel in London.

The finalists and winners were selected by an independent panel of judges including Jane Howard, partner at Wragge Lawrence Graham & Co LLP, Ndungu Gathinji former chairman of the Institute of Certified Public Accountants of Kenya (ICPAK) and former IFAC board member, and Mark Koziel, vice president – firm services & global alliances at the American Institute of Certified Public Accountants.

To win the category, DFK International had to demonstrate the execution of profitable growth strategies, be recognised by the industry as a reputable brand that consistently delivers high-quality professional services and excelled in a number of key strategic and operational areas over the past 12 months.

DFK International’s entry was based upon its contribution to advancing the profession for more than 50 years and its significant progress in recent years in gaining new members, enhancing members’ cooperation and creating special value for members through its investment in IT infrastructure.

In announcing the winners, the International Accounting Bulletin said: “DFK International is the second fastest growing organisation in the top 10 global associations in financial year 2014. It has expanded its presence beyond its traditional footholds of Europe and North America and added members in all regions.

“DFK International sustained growth despite some challenging conditions in key markets as well as its all rounded nomination with a particular focus on sustainability, and its internationally driven mind set and resilience in front of adversity were all contributing factors for the association’s win in this category.”

“These Awards celebrate excellence in the international accounting profession and it is therefore a tremendous honour to be recognised as the leading association in front of such a distinguished industry audience.

“It recognises the advances that DFK International has made which over the last year has seen our continuing expansion with high-quality accounting and consulting firms worldwide, and it will no doubt help to inspire us to achieve our greater ambitions going forward.”

The forum and awards ceremony is aimed at UK, European and global accounting firm leaders and brings together some of the most prominent figures in the industry.

Talks at the event focused on the accountancy landscape in 2015, disruption, data security and digitalisation, with a panel of expert speakers debating what the accounting industry will look like in 2020.

The Association of the Year Award follows on from the world survey conducted by the International Accounting Bulletin earlier this year which saw DFK International record one of the highest growth rates of fee income in the world in 2014 to be ranked seventh largest accounting association.

DFK International has over 400 offices in more than 90 countries worldwide.

Any cookies that may not be particularly necessary for the website to function and is used specifically to collect user personal data via analytics, ads, other embedded contents are termed as non-necessary cookies. It is mandatory to procure user consent prior to running these cookies on your website.